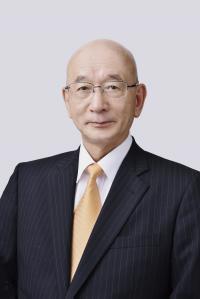 - Director, National Council for the Promotion of Remote Islands

- Vice President of the National Association of Sign Language Directors

- Director, National Council for the Promotion of Mountainous Areas

- Director, National Association for the Preservation of Traditional Building Groups

- Chairman, Yamaguchi Prefecture Council for the Promotion of Remote Islands

The Beauty of Hagi That Even its Citizens Did Not Recognize

KATO I was looking forward to visiting Hagi in September, but I am sorry to say that I will not be there due to the coronavirus. Normally I would have met you and told you in person, but I would like to congratulate you on your election as mayor in March this year.

Tanaka Thank you very much. When I was a member of the Yamaguchi Prefectural Assembly, I used to accompany Mr. Nomura, the former mayor of Yamaguchi City, wherever he went, so I one-sidedly knew Ms. Kato. I have heard about the "Sites of Meiji Japan’s Industrial Revolution: Iron and Steel Manufacturing, Shipbuilding and Coal Industry" from the very beginning, when the project first launched. At first, I was skeptical that Hagi would actually be inscribed on the World Heritage List because each of the properties in Hagi is so small. However, I was deeply convinced when Ms. Kato talked about how the story is the main part of the industrial heritage. The industrial heritage was the first of its kind in Japan at the time, so it was a difficult project. Mr. Nomura has always told me that without your hard work, the project would have been abandoned.

Kato  No, no. It was only with you and everyone else’s help that we were able to give shape to our dream. I am very grateful to the former mayor of Hagi, Mr. Nomura, for his understanding at an early stage. Everyone in Hagi has a deep knowledge of history and is very talented, but Mr. Nomura is like a teacher of history to me.

Tanaka When the World Heritage Site was inscribed in Bonn, Germany in 2015, I was watching it through the screen at the public viewing room in the city hall and Ms. Kato and Mr. Nomura were sharing handshakes with one another. I was so happy and I shouted “hurrah!” in spite of myself. (Laughs)

Tanaka Yes, it is. It is a great honor to have five World Heritage sites. I was born and raised in Hagi, and although I moved to Tokyo to go to university, I did not hesitate to return to my hometown after graduation. Being in Hagi allows me to have peace of mind. Hagi has an Edo-period cityscape, historical buildings, a spectacular view of the Sea of Japan, delicious seafood, mountains, hot springs, and so on…… I have always been proud of my hometown, but since it was inscribed on the World Heritage List as a component part of the "Sites of Meiji Japan’s Industrial Revolution: Iron and Steel Manufacturing, Shipbuilding, and the Coal Industry," I have become even more proud of it.

Kato  There are many great places to visit in Japan, but Hagi is one of the most popular sites and is often featured in magazines. I love it as well.

Tanaka  I'm glad to hear you say so. Nevertheless, because it is a tourist spot, it was hit hard by the Corona ....... There is not a single chimney in Hagi. In other words, there is no industry. Our economy is based on showing people our historical sites, so it is very serious that we are losing tourists.

Kato What was it like prior to Corona? Has the number of tourists increased since it was inscribed on the World Heritage List?

In addition, the city's tourism association proposes tours to the World Heritage sites, and this year also holds a free-of-charge "Hagi World Heritage Card Rally" to collect cards by visiting the five "Sites of Meiji Japan’s Industrial Revolution" in the city. We would like to encourage tourists to participate in this event, but I would like to first encourage citizens of the city to participate. This is because many people here are familiar with the Matsushita Village School, Hagi Castle Town, and the Hagi Reverberatory Furnace, but on the other hand, they are not quite familiar with the Ebisugahana Shipyard and the Ohitayama Tatara Iron Works. I want people in Hagi to realize that there is so much more to Hagi than meets the eye.