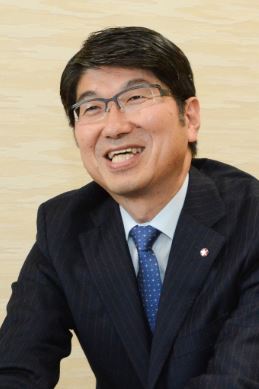 -- What were your impressions when you first heard about the Sites of Japan’s Meiji Industrial Revolution concept?

To be honest, I thought that registering a World Heritage site would be a huge undertaking.

There was the prior history of the “Association to Make Gunkanjima a World Heritage Site” launched by an NPO in March 2003. At that time, I was serving as the assistant manager of the Tourism Promotion Section of the Nagasaki City Tourism Department, and I participated in the “Gunkanjima Forum Summer 2003” which was held in Nomozaki Town in August 2003 as one member of a group focused on Gunkanjima as a tourism resource, where I met Ms. Koko Kato. She spoke about the desire to have the industrial heritage sites that built the foundations for Japan to become the economic superpower of Asia over just 50 years from the final years of the Tokugawa Shogunate through the Meiji period treated as World Heritage Sites, and I recall being overwhelmed by her great confidence and energy in moving forward. Of course, I was greatly inspired by this superb concept. Yet at that point in time I was uncertain whether such a grand idea could actually be realized.

-- How has the city of Nagasaki been involved in the activities for the World Heritage listing?

I was also surprised when I heard about the concept of serial nomination, grouping industrial heritage sites of Nagasaki including Gunkanjima, and seeking World Heritage listing together with industrial heritage sites in other prefectures. That is because I had always thought that World Heritage covered individual sites of symbolic significance, such as Kinkakuji Temple.

This was also a difficult struggle because there was no familiarity with this kind of serial listing in Japan. When, despite all this, the “Modern Industrial Heritage Sites in Kyushu and Yamaguchi” of the eight cities in six prefectures Hagi City, Kitakyushu City, Omuta City, Nagasaki City, Karatsu City, Arao City, Uki City and Kagoshima City (subsequently revised to the “Sites of Japan’s Meiji Industrial Revolution” with the addition of Kamaishi City and Izunokuni City) were listed on the World Heritage tentative list in January 2009, I was deeply moved. This was the result of Ms. Kato’s responsiveness, dynamism and patience in facing the various problems of the local municipal governments and resolving these one by one while consulting with the national government.