Vol.40
To Mark the Passage of "Time" Together with Nirayama Reverberatory Furnace ～To increase the attractiveness of "reverberatory furnace tourism" through the use of commercial museum and restaurant business～

－How did your tourism business get on track and became successful after that?

Inamura: The turning point came during the high growth period after the war. First, we entered the tea industry in 1954 and started manufacturing and selling tea. Then, in October 1964, at the time of the former Tokyo Olympics, we opened the “Charcoal Grill Barbecue Narusawa,” which had private rooms that served food and drinks. Furthermore, we added tourist facilities such as a swimming pool and trout fishing, which allowed us to successfully attract tourists. It was just at the dawn of motorization, and I believe it was the beginning of the restaurant industry.

During this period, the town hall began to charge the entrance fee for the reverberatory furnace, however, our company—that had a shop in front of the gate—continued to provide volunteer guides to guide tourists. We continued to offer these guides free of charge until the site was inscribed as a World Heritage Site by UNESCO.

－Who exactly did the work as the guide?

Inamura: Some of our employees and my grandfather used to show people around a lot. He used to talk passionately about how national defense ought to look like, and the hardships and great achievements of our predecessors, including Tarozaemon Egawa. My grandfather, who struggled in his youth, had a motto of “simplicity and frugality,” and when he became passionate while guiding tourists, he would often lecture them on such life lessons. This is an episode I heard from an elderly customer who also told me they have been here before. I still hear this kind of story from time to time even in this current day and age. Perhaps because my mother, Tsuruko, was raised by my grandfather, she is proud of the reverberatory furnace and cannot stop talking about it once she starts. She will be 91 years old this year, but she is still working at the gift shop to sell souvenirs. She was introduced on a filming trip in Nirayama for NHK’s “Tsurube no Kazoku ni Kanpai” (A Toast to the Family of Tsurube) and is known locally as the “energetic grandmother of the reverberatory furnace.”

－By the way, how did you and the local people around the reverberatory furnace get involved in the process of inscribing the “Sites of Japan’s Meiji Industrial Revolution” on the World Heritage List?

Inamura: Initially, the project was designed to focus on the heritage of modernization of the Kyushu and Yamaguchi area, but I think it is safe to say that it was not until the Japanese government finally decided to nominate us to UNESCO that we joined the project in earnest and created a system to promote it. We were told out of the blue that the history of the modern steel industry of Japan would not be complete without the participation of Kamaishi and Nirayama. That is how it felt at first.

Inamura: Yes. The previous souvenir shop was located in the current guidance center. Nevertheless, the Izunokuni City decided to open a center as part of their development project for the World Heritage inscription, so to assist that we built a new gift shop—combined with a restaurant—across from the lawn park. The exterior of this facility was actually modeled after the exterior of a brewery from the Meiji period. The design was taken from an engraving of a woodblock print made as a tool for advertisement found in a Buddhist temple (see photo below). 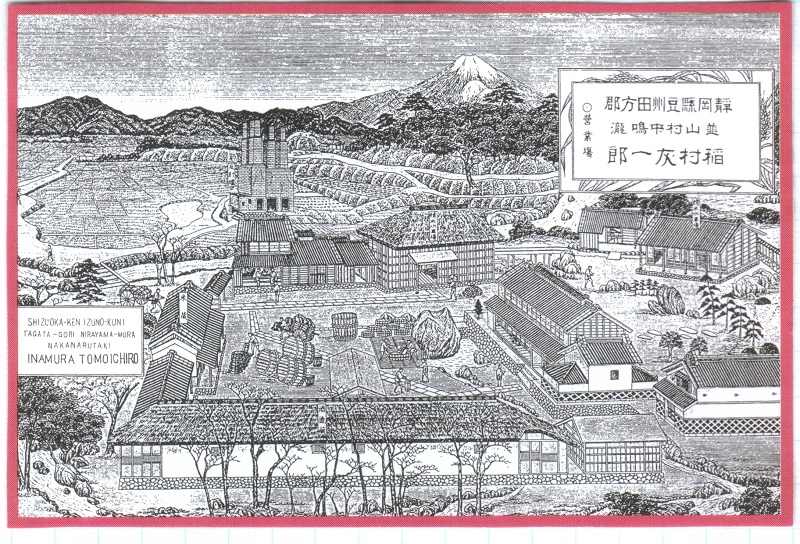