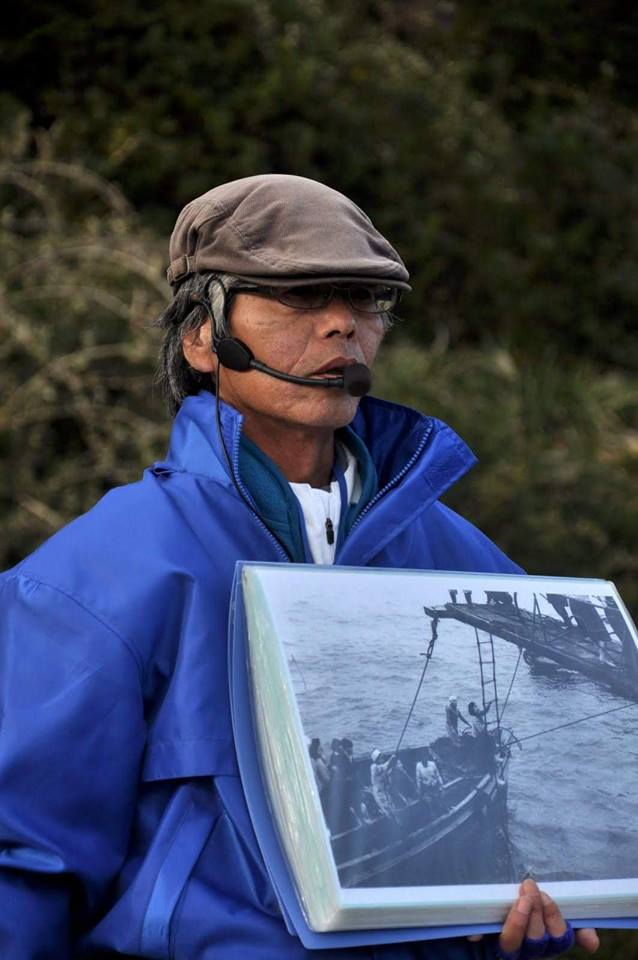 1965: Moves to the island of Hashima (Gunkanjima), Nagasaki Prefecture in 6th grade.

1975: Leaves college and gets a job in computers in Tokyo.

1999: Travels by ship to Hashima for his 25th class reunion and is shocked at how much the island has weathered. He starts becoming involved in activities to preserve the island.

2003: Establishes and becomes president of the NPO, Way to World Heritage Gunkanjima. Today he actively engages in a variety of efforts, mainly working as a Gunkanjima tour guide, but also holding seminars and writing books.

■7-Story School and 9-Story Apartment Building: Moving to a “Futuristic City” in the 6th Grade

――I understand you were given two letters of appreciation from the Sites of Japan’s Meiji Industrial Revolution Route Promotion Council for your many years of involvement with Hashima island (Gunkanjima) that contributed to the promotion of the World Heritage route promotion, once at the council’s 2017 meeting and again at its 2018 meeting held in November (two companies and four individuals in Japan have been given a letter). How did you come to be involved with Gunkanjima in the first place?

Mr. Sakamoto: I was born in Chikuho, Fukuoka Prefecture, so I didn’t really have any connection with Hashima. My father worked at a coal mine for Mitsubishi and when I was in sixth grade the company transferred him to Hashima Coal Mine. So, my whole family moved to Hashima. That was my first encounter with the island. It was my first time to see the ocean and ride a boat. I was already sad because I was transferring to a new school in December just a few months before graduating elementary school, so when I arrived on the island after an hour and a half of crossing the rough winter sea, everything in my stomach came out and I really cried.

――You had a pretty vivid first impression of the island, didn’t you?

Mr. Sakamoto: Before going, all I heard about the island was that it had a coal mine, so I really regretted going when I got there [laughs]. The environment of the island was totally different from Chikuho. It was only the late 60s, but my school was a seven-story steel-frame building and we lived on the ninth floor of a big nine-story apartment building. My school in Chikuho was a two-story wooden building and I hadn’t even seen buildings much taller than that before. I went to school on the island through junior high, but I always felt a conflict in my heart of wanting to run away back to Chikuho.

――You left Hashima to go to high school?

Mr. Sakamoto: I commuted to Takashima High School on the mainland by boat. After graduating high school, I left the island. I moved to Nagasaki City and went to college there. So my 8 years of Hashima life was ended. While I was in college, I sometimes went home to Hashima when my money got low.

――Was that around the time when Hashima Coal Mine was closed?

Mr. Sakamoto: I was about 20 years old. One time when I went home after being away for a while as I always did, my parents were waiting on the pier. I wondered what was wrong, and it turned out that the coal mine had been closed and the residents had to leave the island that day. At the time we didn’t have mobile phones so I was going home without any idea of what had happened. I ended up not going ashore—my parents and I left the island together. That was the last I would see of the island for a long time.

――Wow, that’s pretty dramatic—suddenly had to leave your hometown like that, where you spent your childhood. Was that when your strong feelings toward Hashima were aroused?

Mr. Sakamoto: I didn’t feel anything special at that time. But everyone on the boat waved good-bye to the island and wept. That scene became etched in my mind. I was half in doubt that we were all really leaving, but that was our very last day on the island.

――So that experience is what led you to become a tour guide for your hometown of Gunkanjima and work towards making it a World Heritage Site?

Mr. Sakamoto: Actually, it was just by chance that I became a Gunkanjima tour guide. After we left, I moved to Tokyo and got a job in computers. That was when computers were huge before there were personal computers, but it was a cutting-edge, sought-after job, and I had no plans to go back to Nagasaki at the time. It was around then that I met my wife and got married. She was born and raised in Hashima so we’re from the same town, but after getting married we planned to live in Tokyo.

But, since she was the youngest of four and the baby of the family, her mother said, “Come back to Nagasaki at once!” She couldn’t let her go [laughs]. So, grudgingly, we decided to live in Nagasaki. I got married when I was 27 and did a wide variety of jobs in Nagasaki until I turned 45. If I hadn’t gone back to Nagasaki then I think I would not have gotten involved with Gunkanjima.