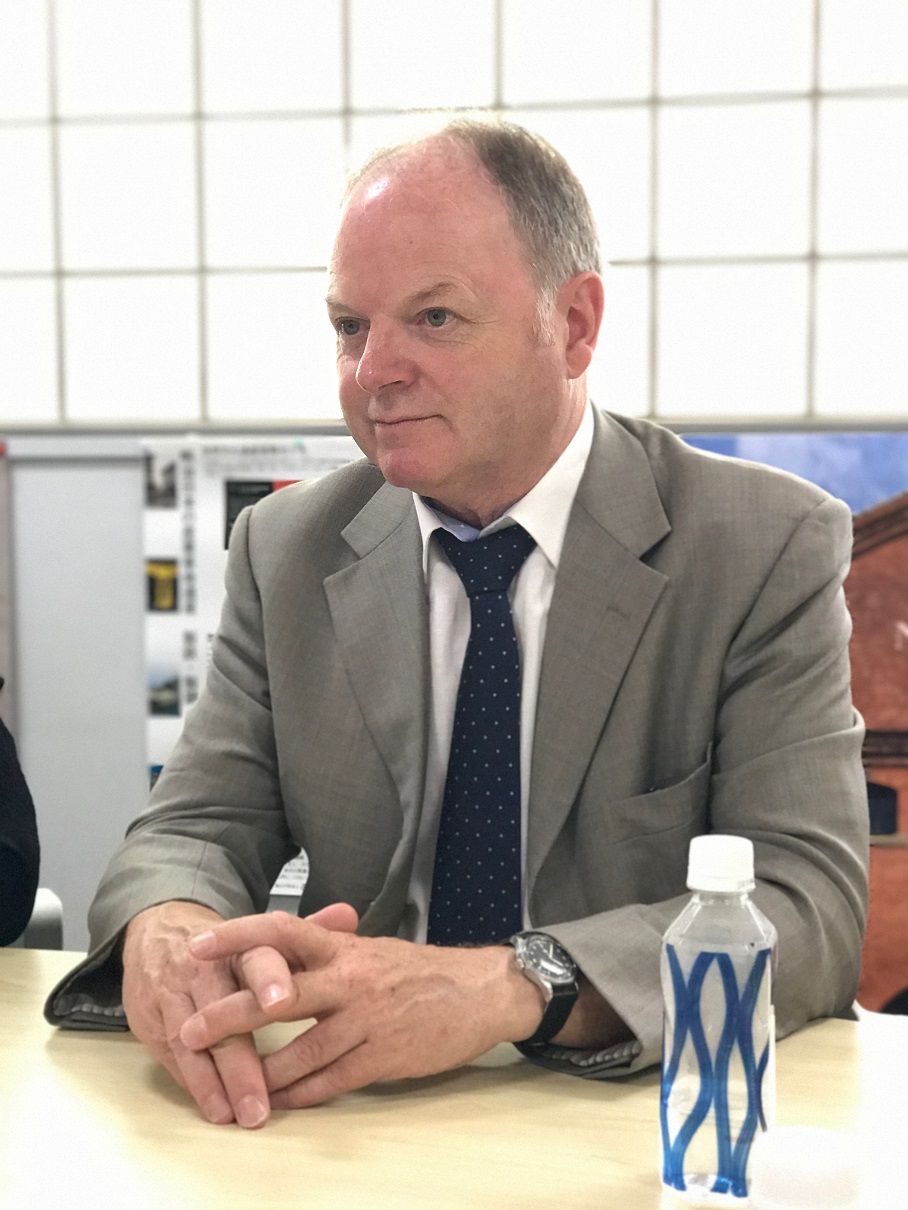 Barry Gamble is an international World Heritage consultant with a special interest in industrial sites. He has been involved as an independent advisor in World Heritage for 25 years, the past 15 years of which has seen an increasing direct involvement with the preparation of five World Heritage nominations in Europe and Japan. He has also worked in Mexico, the Caribbean, South Africa, Australia and New Zealand, and advice is currently being provided on three further nominations. He is a member of both ICOMOS and TICCIH.

――Mr. Barry Gamble, in your role as a World Heritage consultant, you devoted considerable effort to achieving the inscription of the Sites of Japan’s Meiji Industrial Revolution onto UNESCO World Heritage list. Could you start by telling us a little about your background?

Mr. Gamble: My background is in geology and geography, and after working in industries in these fields, I began working in World Heritage interpretation in 1995 through my position as a lecturer at the University of Plymouth in the UK. In 2003, I got involved in activities aiming to get Britain’s Cornwall and West Devon Mining Landscape inscribed onto the UNESCO World Heritage list, which we accomplished in 2006.

After that, I began working in World Heritage around the world in places like Australia, Mexico, South Africa, and New Zealand, and got involved with the Sites of Japan’s Meiji Industrial Revolution in 2006. I’ve been making use of my geology and geography expertise now for roughly twenty-five years, and continue to work primarily as an advisor for achieving World Heritage registration.

――What sorts of things are your areas of specialty as a World Heritage consultant? And haven’t you ever worked in-house for UNESCO or ICOMOS?

Mr. Gamble: In terms of a field of expertise, I specialize exactly in industrial heritage. That said, when it comes to World Heritage registration my consulting activities focus on the process of how to go about accomplishing registration. I’m a member of ICOMOS, but haven’t ever worked as an employee of either UNESCO or ICOMOS. I just consult directly with governments, local municipalities, and other administrative bodies in various countries that have World Heritage sites as an independent freelance consultant.

――Had you had any prior involvement with Koko Kato, the managing director of the Sites of Japan’s Meiji Industrial Revolution Project, before you became involved with the project in 2006?

――That would mean that after your major success with the Cornwall and West Devon Mining Landscape, you barely rested at all before starting to work on the Sites of Japan’s Meiji Industrial Revolution. Is that right?

Mr. Gamble: That’s right. I first came to Japan in November 2006, only five months later. And there was a reason for that. Namely, the Cornwall and West Devon Mining Landscape was inscribed onto the World Heritage list using a serial nomination approach. Based on our experience, Stuart and I, in discussing the matter from various angles, had drawn the conclusion that Japan’s industrial revolutionary heritage, being a large-scale undertaking with components distribute over a wide area, just like Cornwall, was therefore eminently suited to a serial nomination approach like the one we had pursued in Cornwall.

As I said, Stuart and I were longtime colleagues and very close friends, so we thought that our experience in Cornwall would be usefully applied in Japan as well. And that’s the reason that I’m here today!