The Choshu Five: Pioneers of Modernization and Hagi's Heritage of Trial and Error 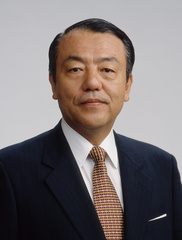 (Note: On March 6, 2005, Hagi was launched as a new city upon the merger of the original city with six neighboring towns and villages.)

Since October 18, 1993: Chair, National Council on Preservation Districts for Groups of Traditional Buildings

Since June 7, 2010: Chair, National Council for the Development of Hilly and Mountainous Areas

Since April 1, 1996： Board Member, National Council for the Promotion of

Since May 30, 2009： Vice Chair, Board of Directors, National Association of

National Federation for the Promotion of Mountain Villages

Since June 16, 2006： Board member, Association of Nationwide

Since April 1, 1997： Chair, Yamaguchi Prefecture Council for the

ーーFive of the 23 component parts of the Sites of Japan’s Meiji Industrial Revolution are in Hagi.

The heritage sites in Hagi date back to the early era of trial and error in Japan’s industrial revolution. Shoin Yoshida, who inspired the leaders of the Meiji Restoration through his teachings, believed that massive industrialization was essential if Japan was to protect its independence from the powerful onslaught of Asia by the Western powers. This was the theme throughout the teachings at the Shokasonjuku Academy to the extent that Shokasonjuku Academy is often referred to as the starting point of Japan’s modernization. To learn how the vast gap in technology between the Western powers and Japan could be overcome, Shoin Yoshida tried to go to the United States, but his attempt failed. Later he studied the West as best he could with his own students and came to believe strongly that Japan needed to adopt Western technology. Four years after Shoin Yoshida’s death, five of his students in the Choshu domain defied the Tokugawa shogunate’s prohibition against leaving Japan and managed to make their way to Britain where they studied at such places as University College London (UCL). The five departed Yokohama Port on May 12, 1863, just two days after the outbreak of the Bakan War (also known as the Shimonoseki War). The Choshu Five were Kaoru Inoue, Kinsuke Endo, Yozo Yamao, Hirobumi Ito and Masaru Ito .

ーーAll of them later rose to prominent positions in Japanese political and civil life. Hirobumi Ito assumed the reins of the Meiji government as the first Prime Minister and Kaoru Inoue served as the Minister of Foreign Affairs, while Kinsuke Endo was appointed the Master of the National Mint. Yozo Yamao became known as the father of Japanese engineering and Masaru Inoue was called the father of Japan’s railways.

Yozo Yamao, known as the father of Japanese engineering, contributed to the establishment of the Imperial College of Engineering. After studying at UCL, he wanted to go to Glasgow in Scotland because he had heard that it was where the Industrial Revolution had started and was also a major center for shipbuilding. However, he had no funds left from the allowance he had been given by the Choshu domain. As it turned out, he was helped by another group of students from the Satsuma domain.

ーーIn April 1865, a year and a half after the Choshu Five had secretly boarded a ship sailing to Europe, the Satsuma domain sent its own group of 19 students to Europe. This group included such people as Japan’s first Minister of Education, Arinori Mori, and Tomoatsu Godai, a leading entrepreneur who contributed to Osaka’s economic development.

After befriending Yamao, the group of Satsuma students took a collection of one pound each and presented Yamao with 16 pounds, a generous gesture reflecting the warm ties between the two domains that existed well before the formation of the Satsuma-Choshu Alliance. This enabled Yamao to go to Glasgow where he worked during the day at the Napier Shipyard and attended evening classes at Anderson College. In a strange turn of fortune, it just happened that the Scottish engineer Henry Dyer was studying at Anderson College at the same time. Dyer would later become the first principal of the Imperial College of Engineering and taught in Japan for nine years. The Imperial College of Engineering would later become the School of Engineering at the University of Tokyo.

Upon his return to Japan, Yozo Yamao was made Construction Minister, and enjoyed the support of Hirobumi Ito and Kaoru Inoue. Today, there are many prestigious engineering schools, such as MIT in the United States, but most had only just opened around this time, and engineering was considered a much lesser field of academic study than science. In Japan, however, science and engineering were considered equally important and carried the same weight in the country’s university education. This is due in part to the importance Shoin Yoshida placed on engineering in teaching his students at the Shokasonjuku Academy.

ーーHow did you get involved in the project to promote the Sites of Japan’s Meiji Industrial Revolution?