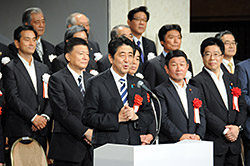 Prime Minister Shinzo Abe attended the reception at the International Conference of Industrial Heritage held in Tokyo.
The Prime Minister said in his address,
"This year Tomioka Silk Mill was registered as a World Heritage. Next year, Japan's Meiji Industrial Revolution will finally come up for judgment. This heritage concept, which includes industrial facilities in operation, is a wide and large-scale concept not previously seen. However, this is not just about a mere gathering of former industrial sites. It can be said that this is about the desperate resolve of the people of the Meiji period who protected their country by opening it up after the long period of isolationist policy, faced the danger of becoming a colony head on, and pursued a kind of dramatic industrialization seen nowhere else across the world. This is why the Abe Cabinet recommended this heritage, and why the Government is now working as one toward its registration.
Under the Tokugawa Shogunate, Japan closed itself off to the world for over 200 years, and strictly prohibited the construction of large ships that could traverse the oceans. When the East India Squadron led by Admiral Perry sailed into Edo Bay in 1853, Japan was thrown into a commotion. Facing this danger and due to the sense of crisis it felt about the need for marine defense, the Shogunate shifted away from the policy it had pursued for so many years and made an attempt to make steamships and iron cannons. However, they faced nothing but difficulty in the construction of both steamships and practical iron cannons. Just before the opening of the country, at a time when the winds of xenophobia swept Japan up in calls to exterminate foreign forces, five brave young people from my birthplace of Choshu (the present Yamaguchi Prefecture) undertook a clandestine voyage to the United Kingdom.
Those five, who would later come to be called the Choshu Five, returned to Japan with the strong resolution to protect Japan from becoming a colony. One of the Choshu Five, Yozo Yamao, who learned shipbuilding as an apprentice in Glasgow, United Kingdom, and would later become Minister of Public Works, is quoted as saying, "Even if there is no industry at present in Japan, if we train a man he will find an industry to create."
These words, spoken at a time when neighboring countries were becoming colonies one after the other, were a prayer for the peace and development of the nation, and describe our ancestors' optimism and determination to industrialize. Fifty years later, Japan constructed that modern industrial state. Japan amazed the world as the first non-Western country to ride the wave of an industrial revolution to transform into a modern state without becoming a colony. The passion of the officials fighting to overthrow the Tokugawa Shogunate, who hoped for the development of the country through the construction of an industrial state, became the driving force for this. Through repeated trial and error with traditional craftsmanship, they created the foundation for the craftsmanship nation that we are so proud of today. In building Japan during the Meiji period, they were able to construct industrial systems and infrastructure during a time of difficulty. The industrialists of Japan's Meiji Industrial Revolution embody that spirit of facing difficulty head on.
This collection of industrial heritage was passed down from generation to generation even through great wars and hardships, disasters, and the undulations of the times. I want to look back over the history of our country once more, and give my full support together with everyone to preserve and pass down this historic collection of industrial heritage that bears witness to that past. This is my thinking.
I would like to close my remarks by pledging to give my all, together with everyone related to this proposal, for the inscription of this industrial heritage on the UNESCO World Heritage List."